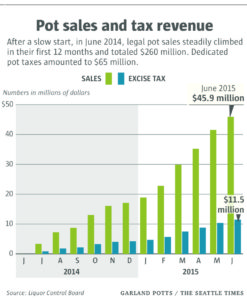 It’s still too early to predict just how big of a success the recreational marijuana industry will be in Washington. The industry has had a rough start. Most blame the State’s regulatory process, which limited the number of licenses issued to producers and retailers and failed to implement policy that would integrate existing medical marijuana businesses into the new recreational industry. The immediate success of Colorado’s marijuana reform made it apparent that Washington’s tightly regulated system caused a major downturn in production. Recreational stores are currently scattered throughout the state but the unavailability of marijuana has made it difficult for business owners to get off the ground. Growers simply can’t get the licenses they need to start selling and there’s more demand than there is supply.

Qualifying and getting a license is already expensive enough, but now the product itself is costing Washington’s recreational marijuana businesses more than they bargained for.

Currently, Washington state’s government is the only big winner. Sales totals were announced for 2014 amounting to over $48 million in total sales up to December 1st. $48,462,549 to be exact. From this, the state drew $12,115,637 in excise tax alone. This does not include the state imposed retail sales tax that is charged at the point of sale.

It takes a lot of money to run a successful marijuana store today. Business owners face heavy taxes including state excise tax, retail sales tax, federal taxes and B&O taxes. Most stores have to take out a loan and even then, there’s major uncertainty behind it with marijuana prices skyrocketing.

Most owners feel as though all their profits are going toward taxes and it’s only going to get worse. When it comes to federal taxes, Schedule I or Schedule II drugs are prohibited from being deducted as a business expense, legal or not. This means stores are not able to deduct their product as a business expense and many owners are hoping there will be a workaround implemented at the federal level.

Of course, this hasn’t deterred cannabis entrepreneurs and early indications show that the industry is going to be a major success. Net sale totals are extremely high, with Seattle collecting the majority of the profits. Stores along the Columbia River and in Bellingham are thriving, despite predictions that these locations wouldn’t perform well.

Current numbers as of December, 2014 are as follows:

There are 89 recreational marijuana retailers in Washington.

There are 257 producers with most also serving as growers.

There are 120 approved edibles and infused marijuana products. These include brownies, snacks, cookies, tarts, truffles and more.

With such enormous tax burdens on recreational stores, there’s still a lot to be seen. Business owners are hopeful that policy reform will follow and the medical marijuana industry will see new changes as well. Loose regulation in the medicinal industry contributed to the slow start among recreational store owners.

One thing is for sure, Washington state’s government is making out big thanks to the pro-marijuana movement and it appears like an industry that’s here to stay.